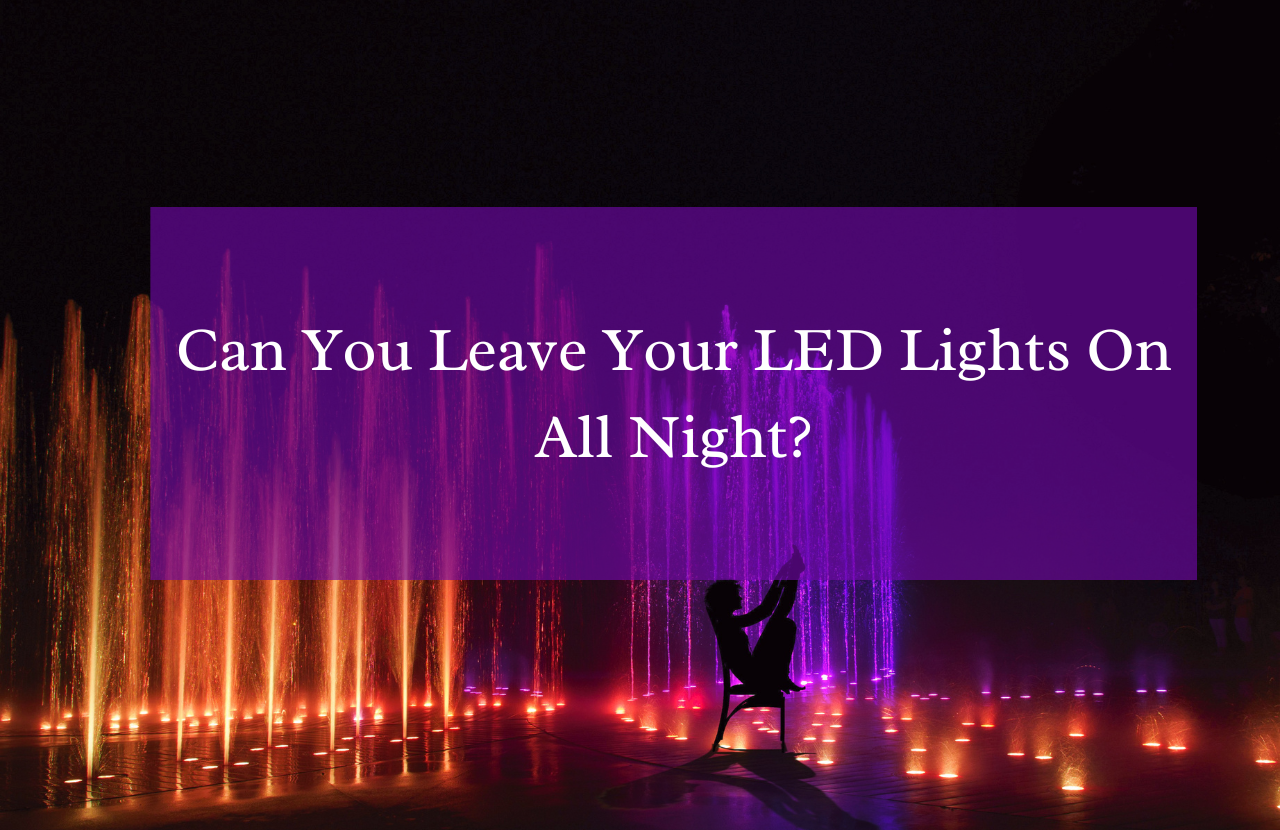 Can you leave your LED lights on all night? If we tell the answer to this question, then we have to mean directly “yes”! Except for defects, power outages, dead bulbs, or a catastrophic event, most LED lights will stay lit, safe, and functional all night. The likelihood of those issues occurring is remote. LED lights have a high build quality and are a durable technology. You could leave them on all the time, 24/7, and not worry about them for years. But you have to read this article till the end because there are more things about your LED lights that should know you.

Basic Thoughts About LED Lights Turn On All Night

It is simple to overlook seemingly insignificant tasks like turning off the light when you leave a room when life is busy.

It’s crucial to be aware of the environmental and safety risks connected with prolonged use, whether it’s just a bad habit or you need to keep your LED lights on for extended periods.

Simply put, adequately manufactured LED lights can be left on continuously, 24 hours a day, seven days a week. This is because LEDs produce less heat than conventional types of light, making them less likely to overheat or catch fire.

But there are limitations to this, just as there are to all electrical devices. LEDs may malfunction under certain conditions. Thus, it begs whether LED lights should be left on continuously.

In this article, We’ll be talking about how long LED lights can turn on and can you leave your LED lights on all night? Let’s stick to knowing everything till the end!

How Do LED Lights Function?

When you look at any LED light, whether bulb or strip, you’ll notice more than just wires connected to diodes, for the most part, LED lighting necessitates adding extra hardware to convert the power it consumes into light while managing it intelligently. The LED driver does this.

An LED driver is primarily responsible for power management, converting higher voltages for regular use, and heat regulation. The driver manages the forward voltage for a string of LED lights. This is the amount of power required to illuminate the bulb. The driver constantly matches the forward voltage with the light’s temperature. This allows the light to keep its temperature and current constant.

If the driver does not do this, the LED may experience a thermal runaway. The idea behind this phenomenon is that as an LED heats up, it requires more forward voltage. This cycle can eventually become out of control, eventually burning out the LED. Instead, the driver manages the current, keeping it intelligently matched to the temperature to avoid this.

Due to this power management, an LED light will never become hotter. This is why they can be used overnight. Remember that sourcing higher-quality LED components is the best way to ensure that all of your LED components work properly. Even with consistent use, a high-quality LED strip, such as these Day better-LED Strips (on Amazon), will last for years.

Can You Leave Your LED Lights On All Night?

Yes! You can leave your LED lights on all night! Though we provide a summary of it in the first paragraph already, still, there have some things you should know!

Compared to incandescent or fluorescent lights, LEDs use a significant amount less electricity. A 60W light bulb’s LED equivalent uses only about 6w. Your monthly electricity bill would be $2.63 if your electricity costs $0.12 per kWh and ten of these 6-watt LED light bulbs were left on for the whole day every day. You would pay the same price over the same time period for a single 60W light bulb.

Additionally, LEDs are expected to last much longer. LED life is typically measured in years as opposed to hours. The expected life of an LED depends on how well its heat is dissipated. In general, since LEDs are tested under ideal conditions, you are unlikely to get the advertised expected life stated by the manufacturer. Still, even a mid-range led fixture will likely last you years.

Please be aware that you should use caution when leaving low-cost LEDs on for an extended period, at least until you are familiar with how they behave. Sometimes less expensive LED manufacturers cut corners on heat dissipation, which means the LEDs could become extremely hot under prolonged use and possibly catch fire. While awake, I recommend running them for about 6 hours to see how hot they get.

Now, if the question is whether you should leave your lights on all night, the answer is yes, you can! But you have to be aware! Though 6kwh of energy is not insignificant, why waste it if you don’t need to?

How Long Can You Leave Your LED Strip Lights On?

Simply put, well-made LED lights are incredibly long-lasting and can be left on 24 hours a day, seven days a week. However, it depends on the power you supply to the strip and the heatsinking capability of the LEDs in the strip. When you buy aluminum crown molding, it usually comes with an excellent heatsink capability.

The strip’s adhesive adheres to the aluminum, forming a very effective heatsink. You can leave the lights on for several hours without incident. Without a heatsink, the LEDs would most likely fail after a few weeks of operation at full power.

They are not meant to overheat. If they feel too hot to touch, turn them off after 15 minutes. LEDs’ lifetime is reduced by half for every 10 degrees Celsius increase in temperature.

Is it Safe to Leave an LED strip On Constantly?

Yes, it is safe to always leave an LED strip on as long as your LED fixture is adequately cooled and wired.

The vast majority of LED products bought directly from China are overvolted, undercooled, and poorly wired. They pump as much power into the chips as possible to make them as bright as possible; they use hair-thin wire and as little thermal management as possible.

As a result, LED products are frequently harsh, hot, and doomed to fail quickly. It is not uncommon for the solder to melt due to poor heat management.

The common misconception about LED strips is that they do not require any cooling.

People believe that because it has a “3M” adhesive strip on the back, it is safe to adhere to anything. To begin with, most Chinese products that advertise 3M adhesive backings are complete nonsense. I use genuine 3M adhesives, and they never peel off.

Second, wood is not a good heatsink, so smearing a few meters of LED strips directly to the bottoms of kitchen cabinets will reduce the leds’ lifespan to a year at best. When the Asian version of “3M” melts off the back of the strip, they will most likely drop off LONG before then.

Spend a few extra dollars and time to put your strips inside aluminum channels. Your strips will last much longer, and your chips will be diffused enough to keep your countertops from looking like the dance floor from “Saturday Night Fever.”

So, to answer your question, don’t leave them on until you’ve stress-tested them to see how they’ll react under constant use.

How Long is it Safe for a Light Bulb to be On?

We’ve all heard scary stories about bad light bulbs starting big fires in homes. But are these stories true? Well, there’s no way to say precisely how long a light bulb can be on before it becomes dangerous.

This depends on many things, like the type of bulb, its quality, the temperature of the room, etc. However, we know that traditional lighting is a lot more dangerous than LED lighting.

Most types of traditional lighting make heat. Incandescent light bulbs, for example, give off 90 percent heat and only 10 percent light. Overall, that’s a lot of heat, and light bulbs get hotter the longer they’re on.

Overheated bulbs are dangerous because they could damage or melt the parts inside, which could start a fire.

This risk goes up if the bulbs are in fixtures that don’t let enough air in or if a higher-watt bulb is used in a lower-watt fixture. Because of this, regular bulbs shouldn’t be left on all the time or for long periods.

LEDs, on the other hand, are safer and cooler than ever. The Centre for Nanoscale Science says that LED bulbs are 90% effective at turning energy into light, which means that only 10% of the energy is given off as heat. Also, LEDs that are well-made have heat sinks that remove any extra heat from the bulb.

Even so, if an LED bulb gets too hot, it won’t melt or cause internal damage; it will just dim. In the end, this means that LED lights are very safe and can be used for a long time.

Note: *CFL and fluorescent bulbs are not designed to be switched on and off frequently. This will shorten their operational life.

Can You Leave LED Christmas Lights On All Night?

In the past, incandescent bulbs were used to make Christmas tree lights. When one bulb burned out, the other lights in the strip would take their power and burn even hotter. From what I’ve said, it’s easy to see why there were so many Christmas tree fires.

But what about Christmas lights today? Do LED lights pose the same danger?

LED Christmas lights are much safer because they stay cool to the touch and get dimmer over time. If one light goes out, the rest of the strip should still work. Also, because they have such a low voltage, children or pets who touch a broken bulb won’t get shocked.

So, you should turn off your Christmas lights at night so that the transformer can cool down.

The transformer takes the high voltage from the power source and turns it into the low voltage that Christmas lights need. Transformers can get very hot, so keeping them well-ventilated is essential, and never putting curtains or gifts over them.

Is it Safe to Leave LED Lights On For a Week?

Does Turning LED Lights On and Off Shorten Their Life?

Can You Sleep With LED Lights on All Night?

All forms of artificial light, including LEDs, fluorescent bulbs, and incandescent bulbs, can disrupt standard sleep patterns. The rhythms of the biological clock are determined by the amount of light and darkness the body is exposed to. Because of this, you should not sleep with any kind of light all night. But you can sleep with your LED lights on all night! There has no issue!

A “normal” incandescent bulb costs about 0.75 cents per hour. In contrast, LEDs or CFLs cost only one-sixth of that – so leaving the lights on (either overnight or while you’re at work, say both are about 8 hours) will cost you approximately 6 cents for a traditional light and about 1 cent for a modern light.

No matter what kind of LED lights you buy, like Christmas lights or strip lights, they are suitable for long-term use.

You should switch to LEDs if you have lights in your home or business that need to be on all the time or for long periods.

Not only will your energy bills go down, but you’ll also be making less of an impact on the environment.

Even though it’s close, remember that LED lights aren’t perfectly appropriate for a better environment, so you shouldn’t leave your LED lights on all the time or at night unless it’s 100% necessary.