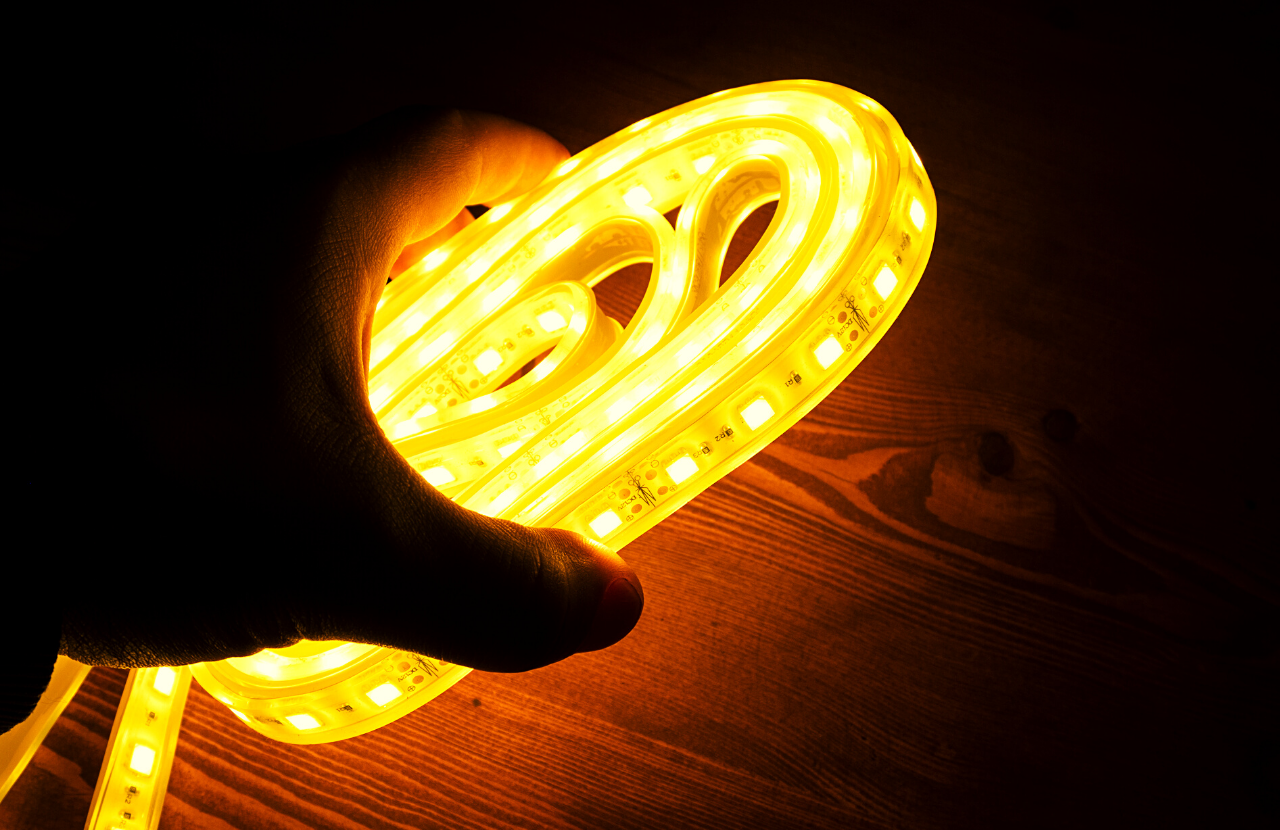 Many people use LED light strips for home decorations, and many use them for outdoor lighting. The simplistic design makes it simple to improve a room. The lights look lovely around your audio setup and are simple to install, thanks to their 3MM backing. However, you may need to relocate your LED light strips from time to time. You might be relocating to a new location or want to migrate the lights. This begs the question of How to Remove LED Strip Lights from the Wall and Reuse them.

If you are dissatisfied with the location of your light strips and want to replace them, or if the adhesives on the back of the strips are failing. Regardless of the reason, resticking LEDs is essentially the same as when they were first put in.

Because you are simply duplicating what has already been done, it will take less time. First, if the old adhesives have lost their stickiness, remove them. To avoid harming the strips, peel the adhesive residue from the back with a cloth dipped in acetone or a citrus-based cleanser.

Make sure the liquid does not come into contact with your LEDs since this will cause water damage and compromise the performance of your strips. Allow the back of your LEDs to dry before applying a layer of double-sided tape, cleaning the surface with rubbing alcohol, and resticking the LED in a different spot.

As you may have discovered, removing an LED light strip is not difficult, but you must exercise caution. Another thing to keep in mind is that you’ll need to reapply an adhesive backing to restick the light strip to a different wall. Let’s go through some specifics on how to do this correctly so that you may get the answer of How to Remove LED Strip Lights from the Wall and Reuse them properly.

How to Remove LED Light Strips Without Damaging Your Walls?

It is advisable to begin at one end. It’s aggravating to try to take the strip off in the middle. It may also cause harm to the strip and the wall. Once you’ve loosened an end, slowly work your way down the strip until it’s entirely free. It’s now ready for you to reapply it to a different wall.

It’s also worth noting that the adhesive backing is sometimes simply too strong and will not come off cleanly. In this instance, accept that you will have to leave the light on or repaint it and prepare accordingly.

However, most models will use an adhesive strip that, while robust, will give when heated. In our step-by-step section below, we’ll go over how you might use heat to protect your wall, perhaps, and speed up the removal of your light strip.

How to Reuse LED Light Strips?

One advantage of using LED light strips is that they are portable. They are not like light fixtures, which must remain with the house or apartment once installed.

There’s no reason to leave the lights behind when you move because they look beautiful when they’re put up. If you follow the proper steps, it’s possible to put back your favorite decoration after you move into your new home.

On the other hand, you may not be moving but would like to relocate the light strips to a new wall or room. Bright LED lights can make your entertainment system look bad if it has audio and visual parts. Whatever your motive for wanting to move the strips, with a bit of patience, you can get them off your walls.

It’s usually a good idea to reuse an LED strip if it’s still functional because you’ll get more bang for your buck. If the adhesive on the back is no longer available, double-sided tape can replace it. This tape functions as glue and adheres to any surface.

An excellent way to use your reusable light strips is as focus points; this can be over your bed or accent artwork. With this type of illumination, the sky is the limit. Due to their thin structure, they are easy to install in confined locations, such as behind cabinets.

How to Remove LED Strip Lights from Wall and Reuse?

When you’re ready to remove LED light strips and reuse them somewhere else, there are four simple procedures to do. Let’s start with the most fundamental, disconnecting the light strip and heating the adhesive.

Step 1: Turn off the light strip and heat the adhesive.

Unplugging any electrical equipment before working on it may seem straightforward, but light strips are slightly different. When you’re trying to see the end of the strip, the extra light can be helpful. LED lights, despite being low-voltage, are still connected to a 120V outlet. Unplugging the lights protects you against an electric shock.

Because the adhesive on the reverse of the LED light strip is meant to adhere to a surface for years, it will not readily peel away. Pulling on the strip will remove paint if you are not careful. Heat the adhesive before removing the light strip to avoid hurting the wall (a hairdryer works excellent for this). You can direct the heat exactly where you want it.

Move the blow dryer carefully and on low to medium heat along the length of the strip. You want the adhesive to soften and remove entirely without causing any damage. It will help remove the strip simpler without removing any wall paint. Apply heat until you realize the strip is becoming easier to remove.

Step 2: Locate an End and a Corner

It is easier to begin at the end of the strip, and it makes no difference which one. Locate a corner that is easily accessible. You’ll also need a thin, flat object, such as a coin, which works well, especially dimes. A credit card or a butter knife can also be used. Take care not to chip the paint, regardless of the item you use.

The flat object should be slid underneath the corner. Because the glue should be soft from the heat, you should only work it in. Once you’ve lifted a corner, continue wriggling the object beneath the length of the cable until you reach the other end.

While gently raising and removing the light strip, the back and forth motion does not scrape the wall surface. If the glue is very stubborn, seek the assistance of another person to hold the hairdryer and continuously reheat the adhesive as you proceed along the length of the light strip.

As the glue releases, carefully pull on the strip. Pulling too hard might cause damage to both the strip and the wall. You don’t want to stop once you start removing the LED light strip. The blow dryer just slightly weakened the glue. The adhesive rehardens as it cools, and you risk harming the wall.

Step 3: Get Rid of the Sticky Residue

You’ll notice a sticky residue on the wall after removing the LED light strip. Don’t be alarmed; this does not imply that the wall is harmed; instead, it simply requires a thorough cleaning. You can use your thumb if there is only a tiny amount of residue.

In a circular motion, rub the stuck-on glue. It causes it to ball up, making it easy to remove off the wall. If there’s a lot of it, clean it up using a soft sponge or rag and soap and water.

Step 4: Reapply and Reuse the Adhesive

When you’ve decided where you’ll reuse the LED light strips, it’s time to reapply the glue. To effectively adhere your light strip back where you want it, as mentioned above, you can use one of two attractive options: Large Command Strips or Double Sided Mounting Tape. You can check this content to know about the Best double-sided tape for LED lights strip.

How to stick LED strip lights on the wall without damaging the paint?

When you discover you need to remove your LEDs from the wall, you may be concerned about the paint. Indeed, because these lights are adhered to the surface using adhesive, there is a big chance of ripping the paint off while removing the LEDs!

Even while removing and re-sticking the LED lights is not difficult, knowing how to do so appropriately and safely for your walls is sometimes a stumbling block for many.

But how can you take your LED lights off the wall without damaging the paint? Before you begin, we’d like you to consider a few actions that must be taken for you to succeed:

Sounds easy. And, in essence, it is. We would, however, like to provide you with more specific information on each stage so that you can accomplish everything correctly.

With that in mind, removing and reattaching your LEDs will always be a breeze for you, regardless of how long the lights are on your walls or other surfaces in your home.

Get Rid of the Old Adhesive From the LED Strips

So, first and foremost, you must remove the old glue left on the LED strips. This must be done even if you only want to fix the part of the LED strip light that has lost its stickiness or you want to replace the whole thing. And, no, you cannot merely reuse them!

Once the lights form a bond with the surface to which they are put, they lose their stickiness and become worthless.

So, what should be done to get rid of the old adhesive? It is pretty simple! Soak an old rag in acetone or another citrus-based cleaner, then vigorously rub the old glue!

Please, however, take care not to use too much liquid! This may cause water damage to the LED lights, resulting in defects in their performance.

When you’ve finished removing the old adhesive and see that your LED strip is clear of it, it’s time to go on to the next stage and remove the lights from the wall.

Remove the lights from the surface in a safe manner

If you apply your LED strip lights to a durable surface (such as a wall) and use the 3M adhesive that comes with the strip, the odds of your LED lights damaging the wall are negligible.

However, if you are still concerned about damaging the surface while removing the old adhesives, the simple instructions we have prepared for you below should help!

Now that the LED lights have been safely removed and the wall has not suffered due to the procedure, it is time to reattach the lights.

How Do You Reattach Your LED Lights?

After removing the old adhesive from the surface, you may begin the process of re-sticking your LED lights. You can also utilize an adhesive for re-sticking purposes, selecting several sticky materials. You could, for example, choose one of the following:

However, glue is not required for re-sticking the LED lights to the wall. Furthermore, due to their extreme stickiness, adhesives can damage the surface of the wall or the furniture (depending on where you adhere them).

Finally, if you don’t utilize them for the first time, you might not want to do it again!

As a result, if employing an adhesive is not an option for you for any reason, we can propose a few different alternatives that you can try.

Among them are the following:

And in the following sections, you will learn how to apply each of these methods appropriately to have your LED light strips fastened to the wall safely and thoroughly.