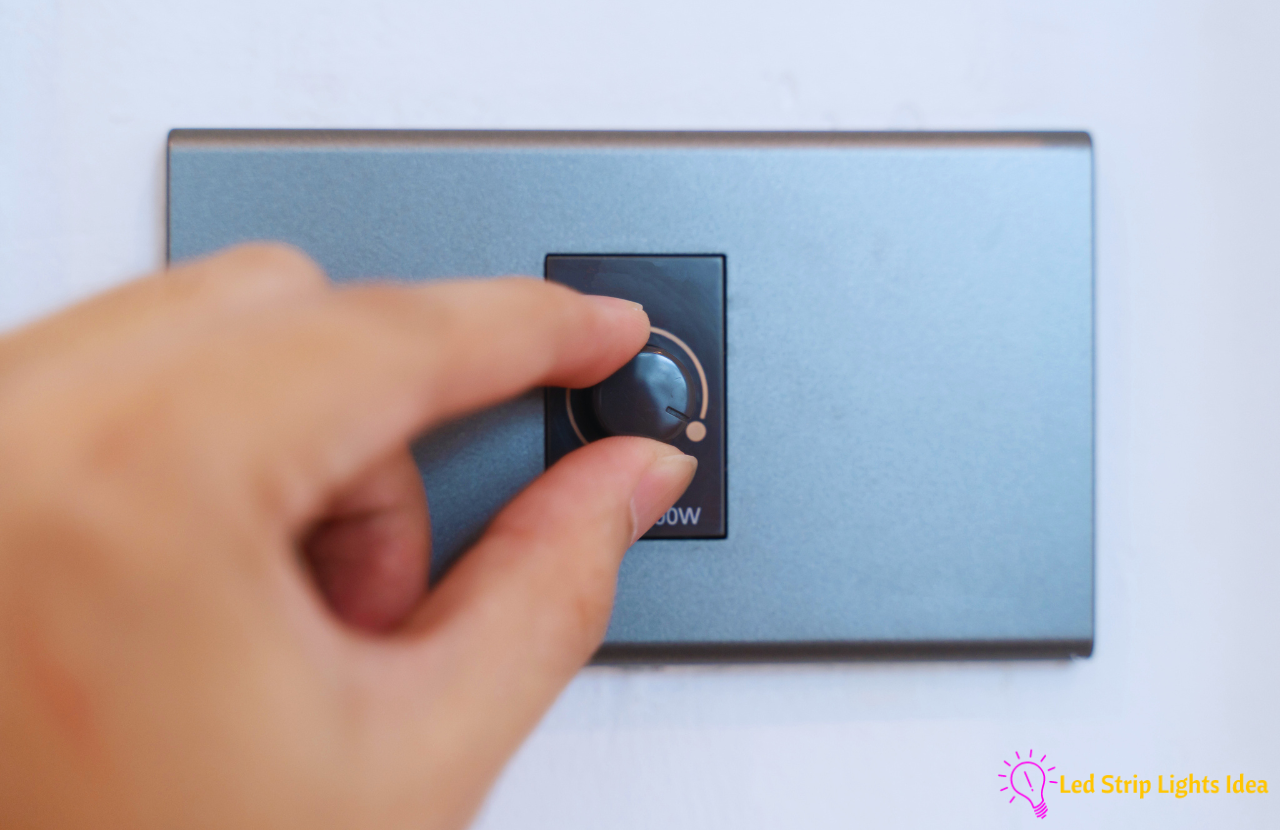 What is a Dimmer Switch?

A dimmer is an electronic tool that will help you to adjust the brightness of your LED lights. It has different forms based on what it will be used for. To turn down the brightness of a light, people can buy either a knob that can be operated remotely or a switch to put on the wall. But some light bulbs, like Philips Scene Switch, let you use a regular on/off wall switch to set your favorite light setting. Thanks to recent improvements in smart lighting technology, you can now dim your home lights directly from an app on your phone, even from a different place.

Can you Dim any LED Light?

Only some LED bulbs can be dimmable, not all! LED bulbs are made with different circuits that determine whether they can be dimmed. These circuits are not interchangeable, so you can’t use one LED bulb instead of another. If you try to adjust the brightness of a light bulb that can’t be dimmable, it might flicker and lose the bulb.

Do you need a Specific Type of Dimmer Switch For LED Lights?

There are two different kinds of dimmer switches: leading-edge and trailing-edge. Some LED retrofit light bulbs and fixtures have drivers that let them work with either type, but a trailing-edge dimmer is more likely to work correctly.

There are a few reasons for this, but the main one is that leading-edge dimmers have a higher minimum load, and because LED bulbs have lower wattage, it’s not guaranteed that they will work correctly with them.

What’s the Difference between Leading Edge vs. Trailing-Edge Dimmers?

There are many kinds of dimmer switches, but the two we’ll talk about here, leading edge and trailing edge phase-cut dimmers, are by far the most common. As their names suggest, these devices work by adjusting the voltage at different points in the sine wave of an alternating current. This lowers the amount of power they send to the lamp.

By a long shot, more people use leading-edge dimmers than others. They have been around longer and are usually used to dim the brightness of mains halogen light bulbs and traditional incandescent bulbs. This gives them a much higher wattage range (usually between 250W and 1000W), which makes it less likely that they will work with LED light bulbs, but it is still possible if the necessary tolerances are met.

Dimmers called “trailing edge” or “LED ready” have been made to be used with LED light bulbs. So, they have a lot in common, like similar wattage ranges and the fact that they are digital by nature, which makes them much easier to use together. The wattages that these dimmers need are much lower, so they work better with LED light bulbs that use less power.

Checking which dimmers work with a certain light bulb is the best way to avoid confusion. Most companies test their products thoroughly to ensure they work with various dimmer switches, and the results are usually easy to find on their websites.

Can you dim a LED Light without a switch?

Even without a dimmer, today’s most advanced technologies allow you to dim your preferred light level. With Philips SceneSwitch, you will need only the wall switch. This smart light bulb incorporates a microchip that remembers the previous light setting. Another alternative is Philips Hue, which increases the safety of your home by turning on the lights in an empty room using an app.

What is the Best Dimmer Switch for LED Lights?

Now we will know the list of the best dimmer switch for led lights. Here is the list!

The Diva LED+ dimmer offers excellent LED bulb-dimming performance. This dimmer is compatible with 150-Watt dimmable LED/CFL or 600-Watt incandescent/halogen bulbs, allowing you to manage multiple bulb types on the same circuit. It is designed to operate a wide range of dimmable LED and CFL bulbs such as Philips, Cree, GE, EcoSmart, and Lighting Science. The Diva dimmer has a paddle switch to turn off or on the lights, returning them to the desired level. This dimmer also has a discrete slide control next to the switch, enabling you to adjust the lighting for any activity. The complementary Claro wall plate is offered separately.

The LUTRON Ariadni LED+ dimmer makes LED bulbs work best when dimmed. This dimmer works with dimmable LED/CFL bulbs up to 150 watts or incandescent/halogen bulbs up to 600 watts. It also lets you control different types of bulbs on the same circuit. It is made to control a wide range of dimmable LED and CFL bulbs from brands like Philips, Cree, GE, EcoSmart, and Lighting Science. The LUTRON Ariadni dimmer has a toggle switch that you can use to turn your lights on or off, putting them back to your preferred level. The slide control next to the switch lets you change the light for any task. A matching wall plate can be bought separately.

The GE-branded Single Pole Rotary Dimmer can help you save energy and money. It’s suitable for switching out a regular switch. Through single pole installations, this rotary dimmer offers smooth dimming performance. Using the dimmer’s complete range of light settings to adjust light levels will dramatically cut your home’s energy expenditures! The dimmer allows you to alter the lighting in each area to suit any scenario, such as turning on the lights when you have guests or dimming them when watching a movie. This dimmer is compatible with incandescent, LED, and CFL lamps.

The dimmer is easy to install and comes with everything you need to put it together except for the wall plate. It will fit perfectly in the hole-in-the-wall plate. If you need to put the switch next to another switch, you can break off the metal tabs on the side. All in all, it is a very nice dimmer. The switch seems strong and works like any other switch. The dimmer is easy to move. Regarding how much it dims the lights at the lowest setting, I guess they are dimmed about 70–75%.

The Skylark LED+ dimmer offers the best performance when dimming LED lamps. The most well-known US dimmer brand is undoubtedly Lutron, a very strong company. They are extremely durable, and they wouldn’t dim at all on the old dimmer. It is larger than a switch, so it might be challenging to get all the wires back inside the box while changing a switch.

What Can you do to Make Sure your Light Bulbs dim Properly?

Make sure the LED light bulbs are dimmable

By far, this is the easiest part. You should be fine if you can at least read the light bulb’s box and product description.

LED technology CAN work with cutting-edge circuits, but it’s much harder to understand, much more dangerous, and won’t make your light bulbs last much longer.

Use a compatible dimmer

We’d most of the time suggest our Varilight line of dimmer switches. They work with many LED light bulbs and have flexible tolerances, low minimum loads and high maximum capacities.

Move to a non-dimmable circuit

How often do you turn down the brightness of your light bulb? Having family over once a year at Christmas probably isn’t enough to be worth the extra trouble. The easiest and most effective way to eliminate a possible set of problems is to eliminate the environment where they can happen.

This ensures that all of the drivers in the circuit are made by the same people and can work with each other. If you use some Philips light bulbs that work with a certain dimmer and then mix them with light bulbs from another brand, the whole circuit will be damaged.

This gets rid of the need for external transformers and also makes it less likely that there will be problems with compatibility. As said above, if ALL of your light bulbs are made by Philips but need a third-party transformer to change their voltage, that transformer also needs to be compatible. If it’s not, well, you get the idea.

Are you using the correct dimmer switch for LED bulbs?

Some LED bulbs can work with old-style dimmer switches, but they’re more likely to work with a more modern, trailing-edge dimmer switch. These can be a bit more expensive than older dimmers, but they are more likely to fix problems like buzzing, humming, being unable to reach full brightness, and bulbs burning out too soon. The wattage of LED bulbs is low, so you’ll need a 250W or 400W dimmer, preferably with an intelligent trailing edge, for smooth dimming.

How should you choose an LED dimmer switch?