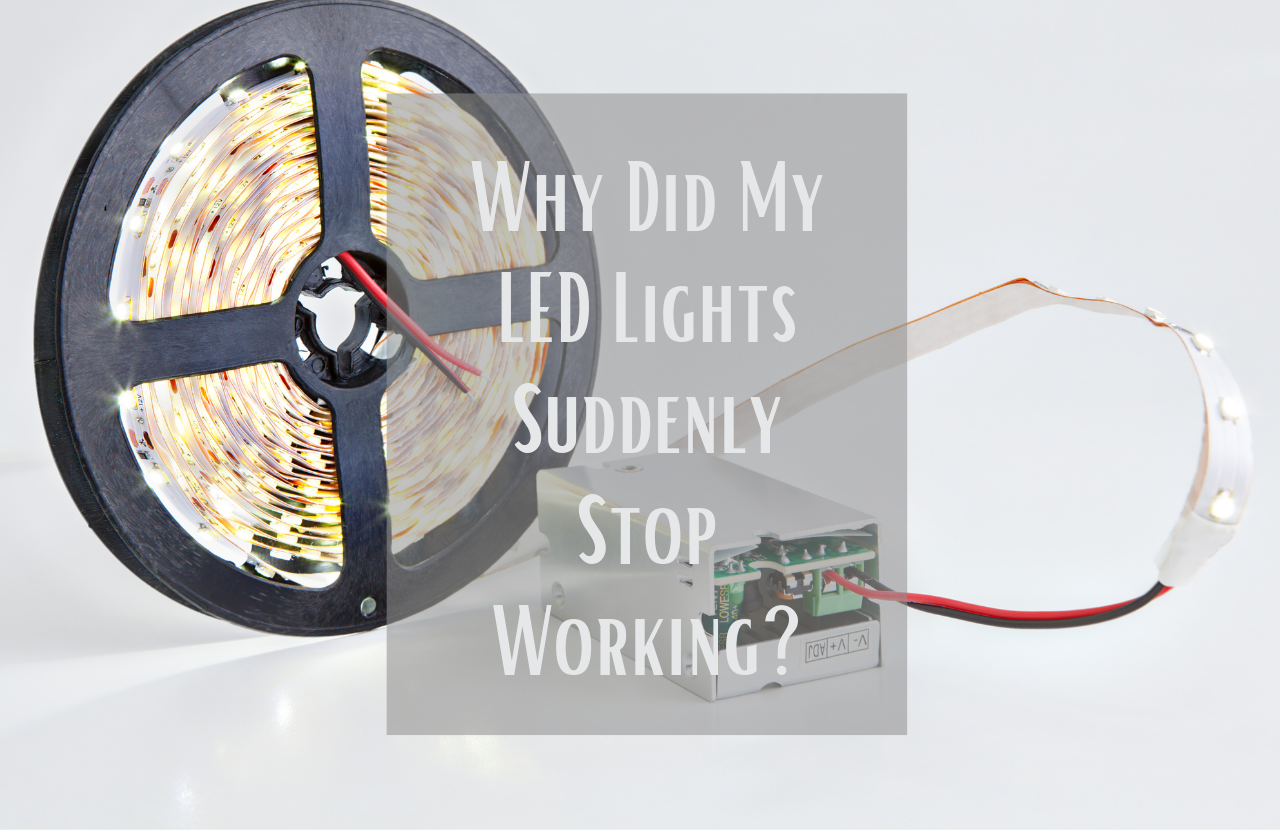 Your LED lights may suddenly stop working because of many reasons. The unit’s electronics or solder connections can be suspect most of the time.

First, you would make sure that your LED lights still have power. If that is okay, you should take the LED light back to where you bought it. They can be fixed, but they might not be worth the work.

But before going back to your LED lights, please read this article to know the question-answer of “Why Did your LED Lights Suddenly Stop Working?”

Why did my LED lights suddenly stop working?

Are your LED lights advertised to last up to 50,000 hours but suddenly stop working after only a year, a few months, or even a few weeks or days of use?

This is a significant issue because there are so many potential causes. Unless you’re an LED light expert or a professional electrician, determining the cause will be difficult.

As we all know, LED lights do not “burn” like incandescent lamps but only dim (reduce brightness). However, they can be damaged due to the burning of other components due to negative reasons from the current and installation.

There are three common causes of LED strip light failure. First, there are power issues; second, there is LED strip light or connector and controller damage; and third, there are environmental issues. You must examine it in these three areas at the first sight! But here we have written down the possible causes of your suddenly stopped working LED lights!

If you have one of these issues then that’s obviously the reason for your LED lights stopping suddenly! So figure out the actual problem first and then go for the solution!

Why Won’t My LED Lights Work After I Cut them?

How will you fix the Suddenly Stop Working LED lights?

Here is the solution to your suddenly stopping LED lights. Follow these steps to fix your LED lights!

For example, for your 12V DC power supply, a 24V LED strip will not work with it. The output voltage will be written on the back of the power supply unit. Then, check the LED strip itself. The LED strip’s connection points will have the input voltage.

Using a multimeter to quickly check the voltage between the two output wires or between the DC plug’s inner pin and outer barrel should show a voltage difference. If it shows less than its rated voltage, the power supply may be broken. For this test, make sure that the power supply is turned on.

Take out any extra dimmers and controllers from the circuit and see if you can still get the LED strip to light up without them. If the LED strip works, the problem is with the dimmer, the controller, or the wires leading to or from those parts.

For this test, make sure that the power supply is turned on. You should never plug a low voltage DC (12V/24V) LED strip directly into a 120V/240V wall outlet.

Look for any loose connections that you can see

Make sure that none of your wires or connectors have fallen out. Try tightening the screws on the DC adapters and putting the LED strips back into the solderless connectors. These are familiar places where the contact breaks.

Look for obvious signs of a short circuit

You may have accidentally made a short circuit by letting the positive and negative wires touch. This is especially likely if you are soldering your wires instead of using solderless accessories.

Do a quick visual check of all the connections on your LED strip and make sure the wires are far enough apart.

This short circuit is more likely to happen when working with strip lights with more than one channel like 5-color LED strips with six connection points.

Look for signs of short circuits that can’t be seen

If you did a visual check and didn’t see any short circuits, you may want to look for ones that can’t be seen. Again, a multimeter is the fastest way to test this.

One place where short circuits often happen is where the LED strip was cut with scissors. LED strips are usually made of two layers of copper with a thin layer of insulation between them. If the scissors don’t make a clean cut, the insulating layer may break at the cut point, causing a short circuit.

If you know there is a short circuit on a section of an LED strip but can’t find any visible signs, try cutting off the last 1 to 2 inches on both ends of the LED strip to get rid of the possibly damaged cut-line segment. We recommend using sharp scissors to make sure the cut is clean. Dull, blunt scissors are more likely to “squish” the copper and insulation layers, causing the short circuit.

I strongly suggest getting a voltmeter and learning how to use it before putting in LED strip lights. So you can quickly and easily figure out what’s wrong with your LED lights and why your LED lights suddenly stopped working. For that, You can buy a multimeter (volt-ohm-ammeter) form here!

The questions in this series show that many users either haven’t taken physics in high school or have forgotten what they learned. So, I strongly suggest buying and reading an excellent high school physics textbook.