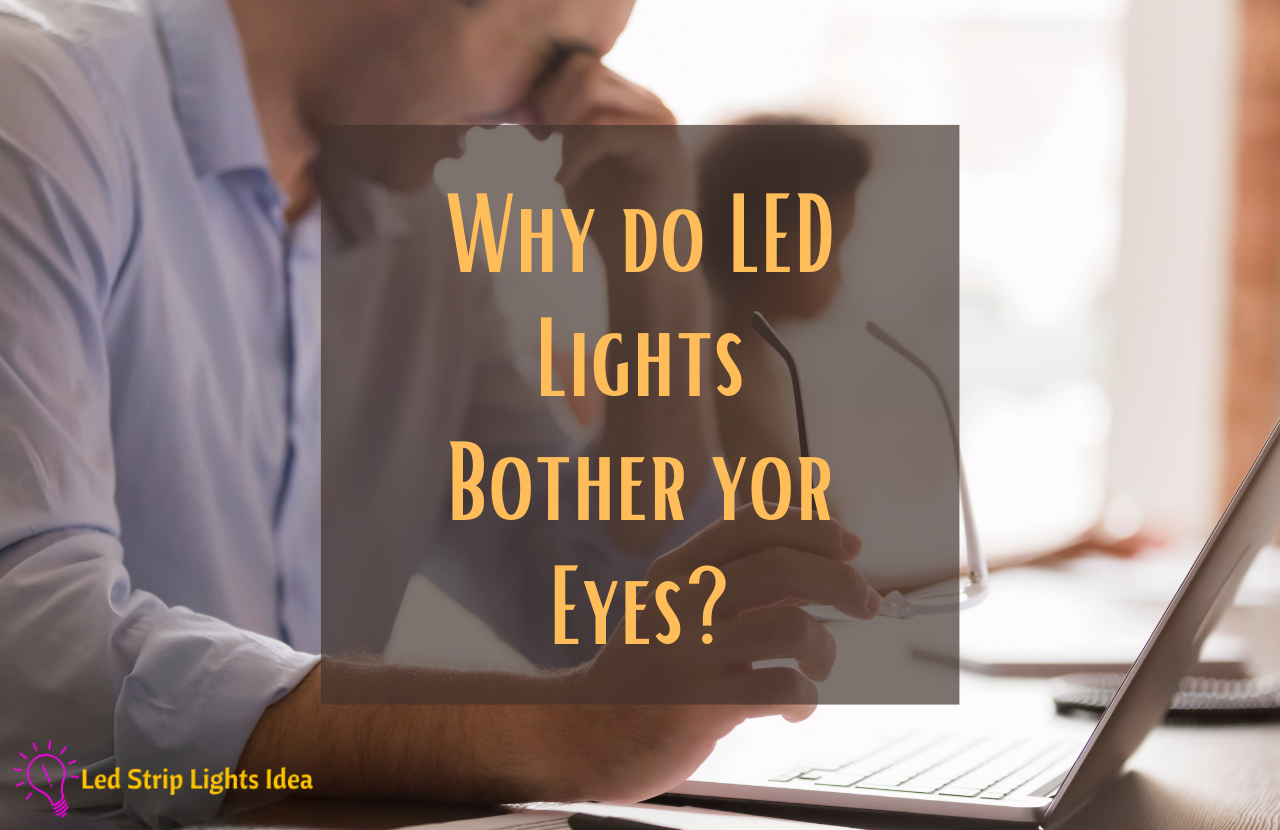 The LED lights may bother your eyes though the lighting technology has developed very much. The term “LED” refers to a semiconductor light source that emits light when electricity passes through it.

LED lighting is growing in popularity due to technological advancement and price reductions. It produces a bright artificial light that many people find appealing, is incredibly efficient, and doesn’t run hot.

But unfortunately, LED lights can bother your eyes and it may be unpleasant for you. Here we are going to explore the cause of the sensitivity of your eyes to LED lights. Keep reading!

Unfortunately, using LED lights also has the drawback of potentially causing eye strain in those who already have conditions like migraines and seizures. This is because LEDs produce an incredibly light flicker that goes by too quickly to notice.

This indicates that the majority of people are unaffected, so unless you are extremely sensitive and prone to these problems, it is unlikely that you will experience headaches, seizures, eye strain, or fatigue.

Why do LED Lights Bother my Eyes?

Even though any kind of light can cause light sensitivity, there are some things about LED lights that could make light-sensitive and bother your eyes. Among these causes are:

The brightness of LED Lights

The first cause of your irritated eyes is the brightness of your LED lights! If you have photophobia, you already don’t do well in bright light.

But your symptoms get worse as the light gets brighter. One reason LED lighting is so popular is that it is bright and doesn’t cost much to run.

A LED bulb will give off a lot more light while using less power than an incandescent bulb. Even when compared to fluorescent lighting, LEDs can give you the same amount of light for less money.

This is great for schools, businesses, and homes that want to get more for their money. But if LEDs make you bother, you might want to hit your head against the wall.

The Wavelength of LED Lights

Most people who are sensitive to light can tell you that certain kinds of light are known to bother them. The color or wavelength of the light is part of the reason for this. Blue light, which LED bulbs to give off, is known to make people sick.

When FL-41 lenses were made, they were made specifically to block the blue wavelengths that fluorescent lights give off. Since then, Axon Optics has made a few changes to these lenses and turned them into glasses that are sensitive to light.

There are many different hues or color temperatures for LED light bulbs. You might see words like warm, neutral, or white next to them (also called daylight).

A lot of people like how bright the daylight bulbs seem to be. But the cooler white light gives off more blue light, which is more likely to bother people sensitive to light.

LED lights, like fluorescent lights, don’t give off a smooth, steady stream of light.

On the contrary, they give off a high-frequency flicker that can’t be seen but can still affect people afraid of bright lights.

People sensitive to light, like those who get migraines, can feel the effects of flickering.

What are the Symptoms of your LED Lights Sensitivity?

Light sensitivity symptoms are frequently associated with other underlying medical issues, such as migraines, chronic headaches, brain injuries, and eye issues such as chronic dry eye, inflammation, eye disease, and injuries. The symptoms of light sensitivity vary depending on the underlying cause, but when exposed to LED lighting, they can include…

Are LED Lights More Preferable to Your Eyes than Fluorescent Lights?

LED lights emit no UV rays, and because they come in various colors, they can also emit warm light (as mentioned above).

Compact Fluorescent Lights (CFLs) are an additional option because they emit fewer UV rays than incandescent and fluorescent light bulbs.

CFL bulbs contain mercury, which can be harmful, but in much lower concentrations than fluorescent bulbs.

LED lights are less damaging to your overall eye health if you choose warmer-colored lights over cooler-colored lights, as there is significantly less blue light and no UV rays produced.

So, it is sure that LED lights may bother you, and you may feel pain or discomfort with your LED lights! But are LED strip lights bad For your eyes? To know the answer to this, you can read this article. And also, there, you will get the process by which you can safe your eyes from LED lights.