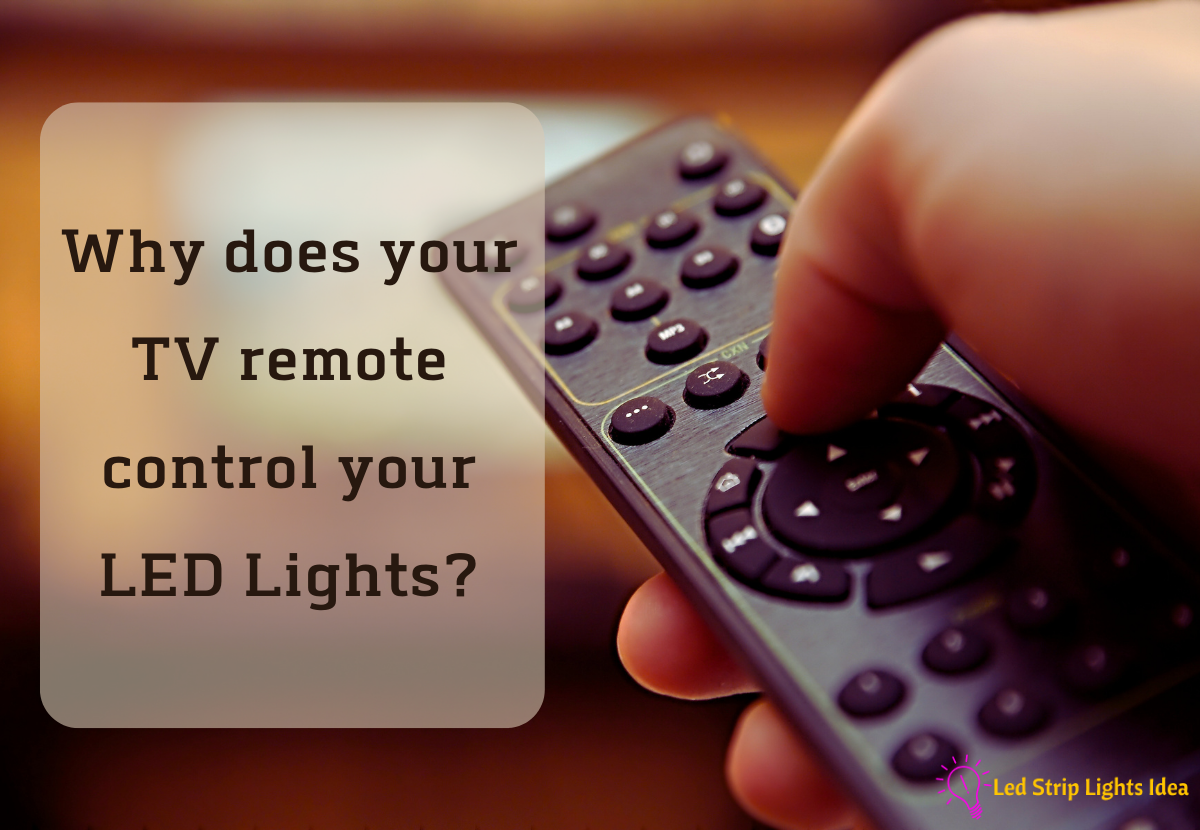 Recently I have bought LED strip lights for the decoration of my room. But suddenly I found that the remote of my TV control’s my LED strip lights! I got shocked! That’s why I searched google to find the reason for the incident! Why does my tv remote control my LED strip lights? And for that, you are here now!!!

The thing is, a TV remote should only be able to do something with the TV. Remote control that comes with a TV shouldn’t be able to control another brand or model of TV.

But many people find that the remote control for their TV also works to turn on and off their LED lights. So if you’re having this problem, the most obvious question to ask is why?

Why Does my TV Remote Control my LED Lights?

In general, if your TV remote and your LED lights were made in China, and your TV remote is messing with your LED strips, it’s likely because the LED IR receiver uses the same IR-receiving thing as the TV remote.

Assuming that your remote is a simple infrared or IR type, these things use flashes of light to send codes from the remote to a device. There are standard chips and codes to send messages because they are familiar and used by everyone.

You have two devices that each send the same message to the other. You can’t fix your problem in any way other than by changing the LED controller. Another LED controller will likely use the same codes since these seem to come from the same place in China.

Can you Control LED lights with a TV remote?

This won’t be possible if not an LED light is configured using the TV remote or for a technical fault! Most of the time, the TV remote can change some things about the LED light because the LED light sensor can pick up the signals sent to the TV and use them to make changes.

You can set up the buttons on the remote you buy to work for both devices so that you won’t need separate remotes.

You can use one device to control both with just a few easy steps. But there are some kinds of LED lights that might not be able to get signals from the same remote you use for your TV.

This doesn’t have to be wrong, though, since most people use their TV remote far more than their light remote. So, having two remotes can save time and effort in the long run.

How do I stop LED lights from Interfering with my TV?

There isn’t much room for eliminating interference within the regulations to prevent interference for low-cost consumer goods. You could try some cunning. They could function or not. If not, you must choose which gadget to use or put up with the interference.

Suppose you are only using your device. It would help if you tried to stop interfering with your neighbor’s equipment. If you can’t and don’t want to risk getting fined, you can’t run the interfering equipment. The way the legislation is drafted eliminates the possibility of a surprise citation. You cannot, however, keep interfering.

I would try to do this. However, without extensive antenna and RF understanding, RF interference repair is black magic. So let’s begin.

You can combine and contrast these actions. On a good day, RF interference is difficult to deal with. You might try these things, but they might not be successful.

What Causes Electrical Interference on my TV?

There are a few possible reasons your remote control might mess with your LED lights. But the main reason is that both the TV remote and the LED light remote use infrared to send their signals. When the TV remote sends infrared signals to the TV, those signals are also picked up by the LED light’s IR sensor. So if the signal or message was meant for it, it does something.